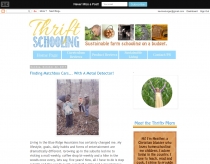 GO RIO: An Affordable Ride on the San Antonio River! 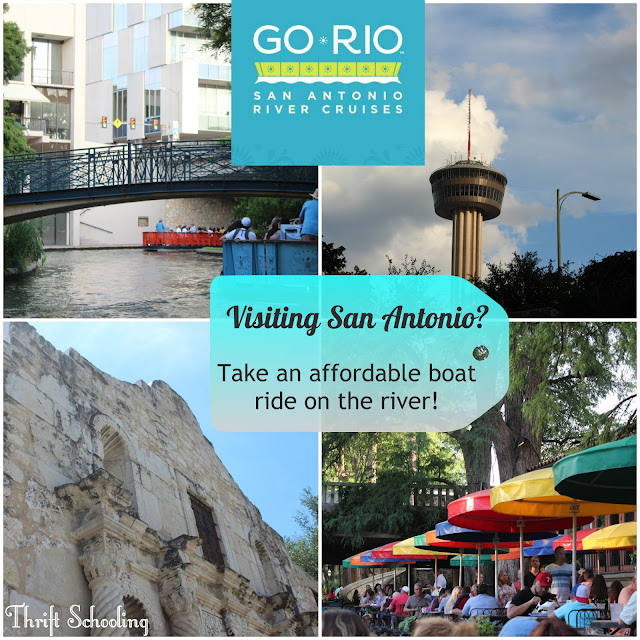 As a homeschooling mom, I had been bugging my husband to visit the Alamo since we have been in South Texas/Mexico the past year. With only a month left in our adventure in this part of the country, he finally agreed. Instead of taking the whole family though, we made a long weekend out of it and celebrated some time together before the dreaded days of packing and trekking across the country with five kids ages twelve and under! What a weekend it was!

Some Texan friends of ours continued to tell us that we had to visit the Riverwalk when we visited San Antonio. I didn't understand what the hype was all about, until we went. I felt like I had stepped out of the US and entered a European country suddenly. The quaint little restaurants. The shops. The boats. The people. The whole ambiance of it all, was breathtaking. 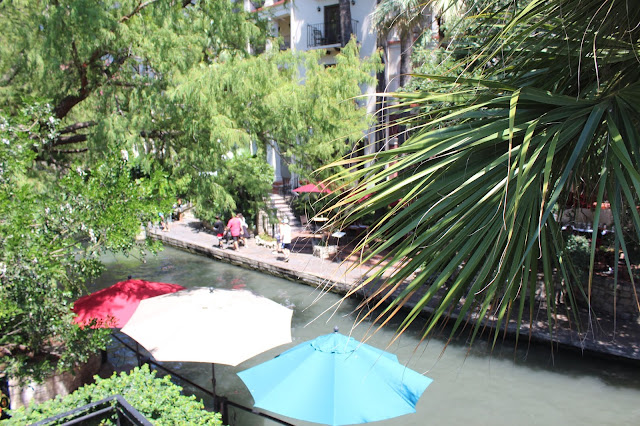 Not only were we spoiled with a hotel right along the river but we made sure to take a ride on the Go Rio River Cruise. How could we not? With several spots where you can hop on and hop off along the river, we were excited to notice that there was a spot to get on right by our hotel! 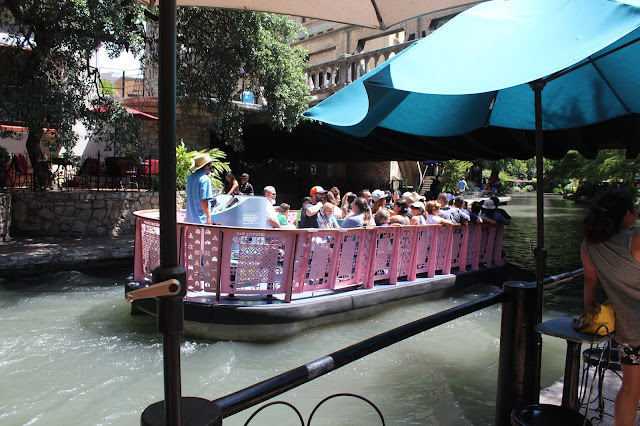 The Go Rio River Cruises provides several options for cruising along this beautiful strip of San Antonio. The following cruises are offered: 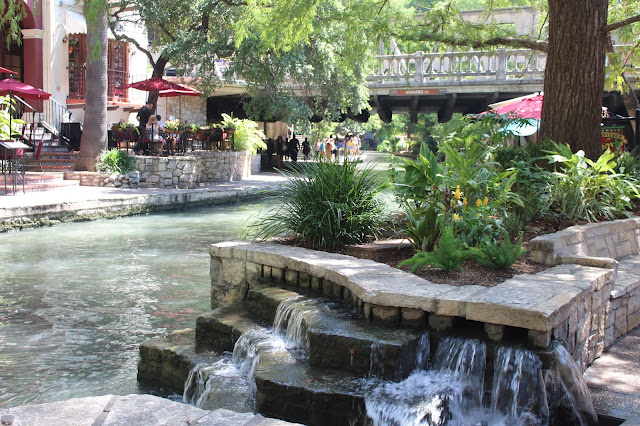 My husband and I went on a 35-minute narrated cruise and it was lovely. One thing I do need to mention is that these cruises fill up fast! Once you purchase your tickets, which are $12 for adults and $6 for children, you wait in line for the next boat. Boats leave every 15 minutes. My husband and I had to wait less than that when we were in line, but, at the time of our ride, the line was beginning to grow behind us. They certainly do pack their guests in the boat so if you did not know the people you sit near before the boat ride, you sure will by the end! Our tour guide was friendly, fun, engaging and knowledgeable about the Riverwalk and the San Antonio area. 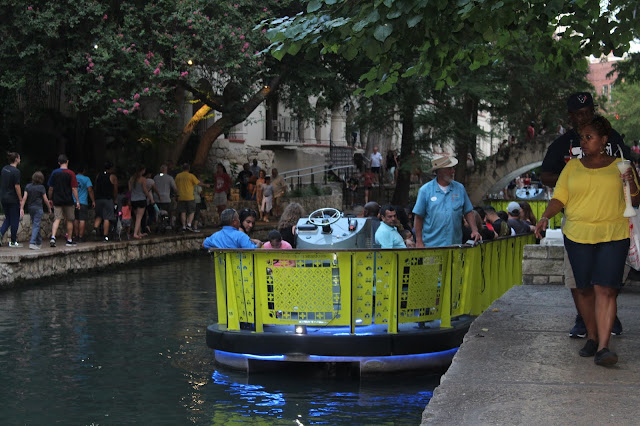 The guide shares with you history, fun tidbits and exciting restaurants throughout the tour. He even shows you how to access the Alamo directly from the Riverwalk. I learned some interesting facts such as, in America, it is a tradition not to allow a shadow to be cast on a War Memorial. Therefore, when a hotel was built next to the Alamo, it was designed not to allow a shadow to be cast on it. Also, the tower pictured at the top of this post, The Tower of the Americas, was originally created for the World's Fair of 1968 which was held in San Antonio. He also shared with us events that were going to be held later that evening along the river that we might be interested in such as traditional Mexican dancing and a light show. 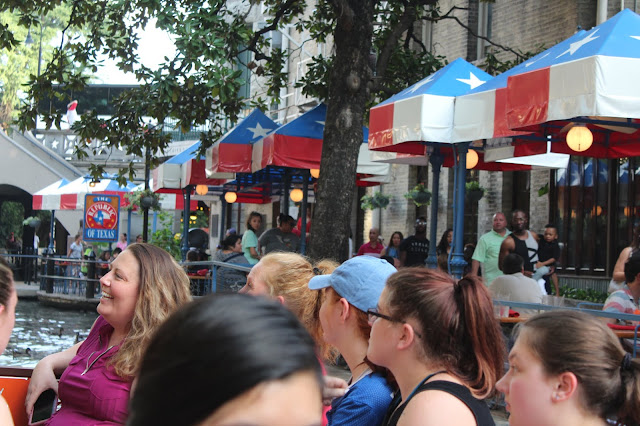 If you aren't interested in the narrated tour, you can purchase a one-day shuttle pass, also for $12 where you can hop on and hop off as you please throughout the day. You can choose between the downtown pass or the museum reach. You can also purchase a combo-pass for only $16. 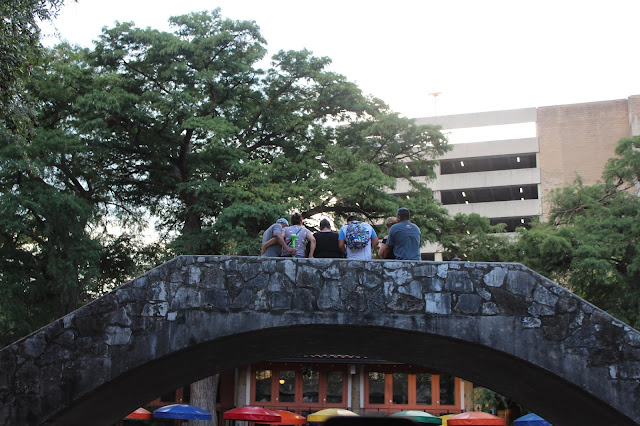 If interested in a dinner cruise or private charter, check the Go Rio website for more info! If you visit the San Antonio area, I highly recommend a Go Rio cruise, it is delightful! 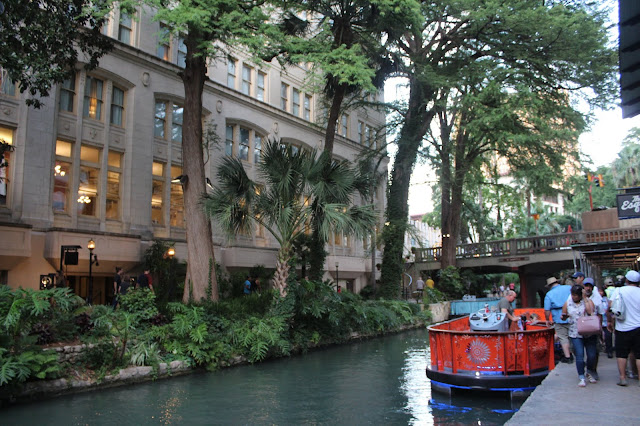 Disclaimer: I receive the mentioned cruise in exchange for an honest review. All thoughts and opinions are my own.